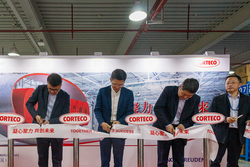 On December 23, 2021, Corteco China opened a new distribution center in Shanghai Chilian (Jinqiao) Science and Innovation Park. This event marks another milestone in the 13-year success story of Corteco China and was celebrated in the new location with the motto "Together towards success".

James Wei, President of NOK-Freudenberg (China), and Richard Wang, General Manager of Corteco China, attended the opening ceremony to celebrate this event together with all employees on site.

Richard Wang gave a welcoming speech at the opening ceremony. The new distribution center in Jinqiao is the result of continuous modernization and provides Corteco China with further development opportunities for the future, Wang said during his speech.

The Jinqiao distribution center was officially opened with the ceremonial cutting of the opening ribbon. The new distribution center is the result of the collaborative effort of all Corteco China and NOK-Freudenberg employees. They make a significant contribution to the success of the company. To acknowledge this, all employees gathered on stage for another highlight of the event. As a symbol of teamwork, the employee with the longest tenure and the newest addition to the team cut the celebration cake together.

With the new distribution center in Jinqiao, Corteco China reaches another milestone since its establishment in 2008. Together, we look forward to the promising future of Corteco China and congratulate them on the new location!

For automatic transmission and power steering:

Worldwide specialists rely on this technique.
And with very good reason.

The vision of a frictionless seal

something that our engineers at Freudenberg Sealing Technologies have come close to achieving with the LEVITEX crankshaft seal.

Corteco around the world

Corteco is represented in over 15 countries. Through the Freudenberg Group, we reach customers worldwide in 60 countries.